There are men and then there are men.  The internet can collectively fawn over Chuck Norris all day, but if you want to find some true badasses, you’re going to have to dig a little deeper.  In the process of this digging, you might find someone like Bobby Rhodes and his no nonsense pimp in Demons and his even more no nonsense fitness instructor in Demons 2.  You might also come across Ken Foree a few times.  Foree is best known for his turn as Peter, the SWAT team member who asked the whitest people imaginable if they knew Macumba. 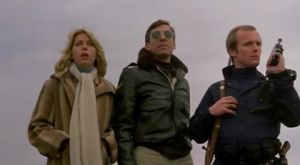 Peter is such a badass that he beats up almost as many zombies as he shoots.  Such a notorious role in a renowned horror film led to a few similar parts.  One such part was Benny in Texas Chainsaw Massacre III.  He was a part time survivalist (only true badasses need apply) who just happened to traveling some desolate Texas back roads at the same time as Kate Hodge and William Butler.  Benny is able to rescue Hodge but not Butler (no big loss) after shooting up the cannibal family’s home with some automatic weapons that I’m not sure he should have.

Regardless, the gun is rendered useless for the climax, which sees a hulking Leatherface chase after Hodge while Benny mixes it up physically with Viggo Mortensen (a pretty badass guy in his own right).  They exchange one liners for a little while before Benny uses a ruptured gas tank and a zippo lighter to set Mortensen ablaze.  As cool as all of this is, the moment I’m looking at today happens as Mortenson is blowing up and Benny is fleeing the scene.

It’s how he flees the scene that’s so memorable.  There’s no way to sugarcoat this.  He runs like a sissy.  It’s all very quick and I had watched the movie several times before I picked up on it.  It was actually a friend who had pointed it out.  Watch carefully between 2:27 and 2:29 in this video

I suppose that it’s plausible that he had injured his leg and that was the reason for this girly gimp, but I just don’t buy it.  There are manly ways to hobble, and Ken Foree of all people should know them.  It may be possible for Ken Foree to get a free pass on this one if it was a stunt double, but I’m still taking director Jeff Burr to task here.  Given the budget of Chainsaw III, it wouldn’t surprise me if this was a one take deal, but they must have rehearsed it a few times before actually rolling film through the camera.  How many different ways did they practice it before they settled on this: 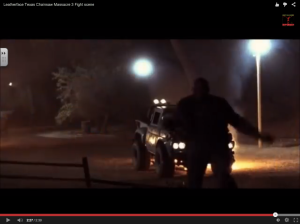 Look at his left arm flailing away out there!  The shit is hitting the fan back there and the film’s badass is prancing away like a valley girl?  Come on, Benny.  You deserve better.

Did the stuntman try it a few different ways only to have Burr rebuff him.  Was Burr looking to capture Benny’s sensitive side at this precise moment?  Or could it possibly have been the stuntman messing with Burr.  Maybe he nailed it like a true action hero during rehearsals then thought it would be a gag to flee like a middle school girl that had just seen a spider.  What was Burr going to do, blow up another truck and film it again?

It’s also possible that in the chaos of the big explosion, no one noticed until the next dailies were viewed.  I imagine that was a pleasant surprise, “Oh good, Benny’s traveling en avant!”

I know I’m nitpicking, but that’s sort of what I do here.  I still think the movie is a blast and had watched it several times over the coarse of 7 or 8 years before I ever even picked up on this shot.  Still, I can never watch the movie without chuckling at that part.  I swear that if I’m ever involved in an incident where something is violently exploding behind me, I’m going to do my best to imitate Benny’s girly run.  I just hope that it doesn’t result in permanent disfigurement just to pay homage to a Jeff Burr moment.  Or, if it does, that at least one person who will get the reference is there to witness it.