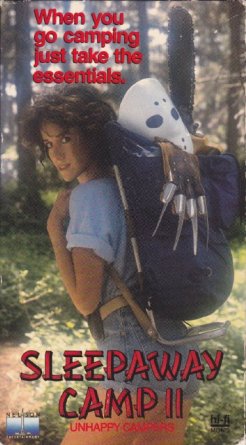 I’m not an outdoors-y person at all.  I do love camping though, and I’m pretty sure this comes from my complete adoration of 80s camp set slasher movies.  The more a campground looks like something I saw in Friday the 13th, Sleepaway Camp, or The Burning, the more likely I am to completely fall in love with the place.

While the ideal camp for me will always feel like the northeastern US, a few movies have been shot elsewhere and still managed to capture that feeling.  Most notable is Sleepaway Camp 2.  I love Camp Rolling Hills and I would love to explore that place.  The woods look great and the cabins have the perfect feel.  The only thing that’s missing is a picturesque lake for frolicking and skinny dipping, etc.

In its place, there’s a pool.  A pool doesn’t seem quite as camp-y to me, but it still sort serves the purpose.  Valerie Hartman does get tossed in wearing a white t-shirt.  Again, this is not as good as a skinny dipping scene where the woman has to search for her missing clothes, but it’ll do.  It’s purely mathematical – Lake > Pool, Skinny Dip > Wet T-Shirt.

So, even if it is a mild disappointment, I can get over the replacement of the lake with a pool.  The movie is strong and makes up for the lack of skin several times over in the short run time.  What I have a harder time with is the color of the pool.  The water is completely green.  It’s not just a little off or not quite blue enough, it’s flat out green.  What kind of camp are they running here?  At one point the camp owner laments about not being able to get the best kids around to attend his camp anymore.  I’m pretty sure the fact that they had all the campers swimming in a murky bog had something to do with this. 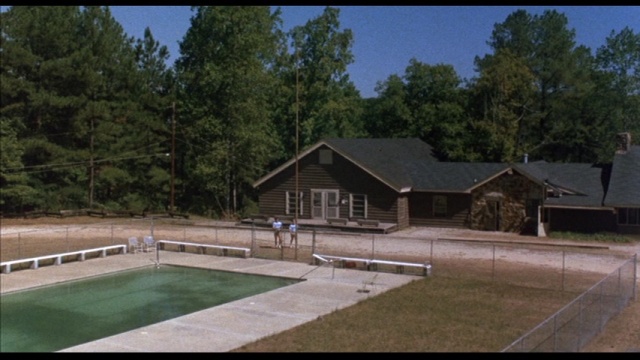 Without the pool chairs and cement, this would be classified as a swamp

What’s most peculiar about the whole thing is that no one in the movie seems to notice.  It would work if a few characters made some comments about how gross the water looks or at least acknowledged that something was off.

Shouldn’t they acknowledge that someone is likely to come up at least slightly mutated?

It makes me wonder if the cast had any issues with this.  Why was director Michael Simpson so dead set on using the pool?  It’s not like there were any scenes set there that were integral to the plot.  They could have easily been shifted the scenes elsewhere or even nixed them all together.  If he felt like they were absolutely necessary, couldn’t he have shot it so that the water was not visible in the frame?  Maybe that would have compromised the original vision slightly, but it would have been a whole lot less distracting than the green pool we were left with.

Alas, he didn’t.  Perhaps he thought that no one would notice or that, if everyone just acted naturally, the green pool would seem normal.  Maybe it does.  I’ve been watching this movie somewhat regularly for more than twenty five years and I’ve very rarely heard other people complain about the pool.  Maybe I’m the weird one after all.