Slasher fans tend to be pretty forgiving of lapses in logic.  We kind of have to be.  Some of my favorite movies have pretty baffling things going on.  These are the moments that detractors of the genre have the hardest time accepting.  I don’t blame them; but if you love slashers enough (especially slashers from the early 80s), you get it.  There’s more to love than just the traditional attributes that make a good movie.

I don’t want to give the impression that I watch these movies condescendingly or with an intent to laugh at them.  I’m not being ironic in any way when I say that I absolutely love Friday the 13th Part IV.  It’s just that when you love a movie long enough in spite of its flaws, sometimes you start to love the flaws just as much.

Having said that, let’s take a look at some of Jason’s curious behavior in Friday IV.  First off, he tends to have a sixth sense for when people are invading the areas surrounding Crystal Lake, so it’s understandable that he doesn’t like it when Rob sets up a tent and various equipment in the woods.  I’m not even exactly sure what these gadgets are.  You’d expect Jason to deal with this in typical mass murderer fashion.  After all, he’s not known for his stunning ability to reason with people.  Instead of butchering Rob’s ass, he breaks his rifle and crumples up his map.  Good luck finding your way home now, sucker!

It’s not just when he’s messing with people though.  He displays some questionable tactics even when massacring the partying teens.  Take Tina the twin, for example.  As cool as it is to reach in through the second floor window and throw her on to the parked car, what exactly was Jason doing out there?  How long was he standing out there?  If it was a long time, would he have sat down to rest for a while?  Were his feet dangling while he was sitting?  He must have felt at least a little lucky that no one saw him while he was waiting around.  He would have looked like a pretty inefficient slasher.

Totally worth the wait

Pretty much the same question can be asked when he killed Sam earlier in the raft.  Was Jason that confident that someone would swim out to the raft at night that he thought he’d wait them out?  I bet he would have felt like quite the asshole if no one came out to swim that night.  A cold, soggy asshole.

Jason also takes quite the circuitous route to kill Sara.  After all, she’s blow drying her hair down the hall when he crushes Doug’s head in the shower.  There’s no way he didn’t know where she was.  He could have marched right in there and taken care of business, or maybe stalked her a bit upstairs.  Instead, he goes downstairs and waits on the other side of a door he’s pretty sure she’ll try to escape from.  He’s right.  Sara finds Doug’s body and runs right to that door.  Is he a student of human behavior?  I know the kids in the movies are predictable, but not to that level.

After all the obvious Jason-fodder has been dispatched, he turns his attention to Trish, the movie’s final girl.  As she goes to explore the party house, Jason waits down in the basement.  Again, his understanding of human psychology enabled him to predict her path.  At this point, that’s hardly surprising.  Then again, maybe he was just rooting through the basement.  We know there were some dirty movies stashed in the house.

What’s surprising though, is the amount of work Jason is able to do upstairs at this time.  He stashes Tina’s body on the step.  This is the same door she entered in a few minutes before.  Was Jason able to walk past them without being noticed?  It was probably important for him to block the most obvious escape route.  No way someone would consider jumping over it.  He also nailed Jimbo’s body up in another door.  I assume he did this while Trish was inside.  This is usually the kind of thing people notice when they enter a house. 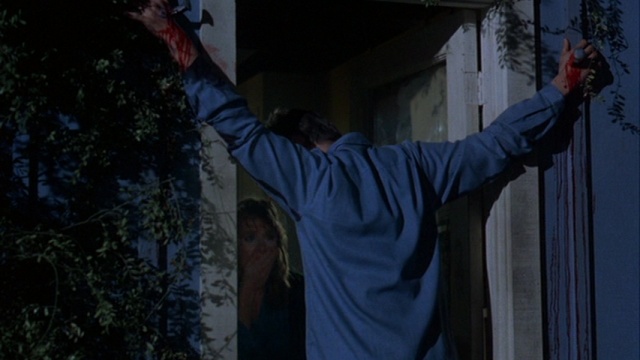 In the two previous movies, Jason sort of operated out of a home base.  Here, he was more erratic.  I’m not sure how much of this was intentional.  Were they going for more of a “Jason in a ghost haunting the area” vibe?  If so, why intentionally show him hoofing it back to Crystal Lake from the hospital morgue?  The way that Ted’s death scene is edited seems to suggest that Jason can scoot around with unnatural speed.

That said, I’ve watched this movie with plenty of people over the years.  Very rarely do I hear anyone complain about it.  It seems to be only the obsessive fans that even notice it.  I have a feeling that it boils down to Joe Zito wanting a cool feeling roller coaster rather than a logical chain of events.