This one is a little more sentimental for me.  When I first met my wife, I was immediately infatuated.  My fondest memories are of visiting her apartment after we got out of work (11 pm) and watching movies on her pathetic little 13″ television until I heard the birds chirping outside.

A gentleman would have probably worked hard to find something that she would enjoy.  I, on the other hand, brought over Italian horror movies, 80s slashers, and, in this case, a collection from Fantoma called Educational Archives – Social Engineering 101.

Nowadays, this stuff is all over youtube.  At that time, though, I had only found a few of these old educational film strips on 16mm reels on a dusty rack at my university.  This collection was a treasure trove.

Soapy the Germ Fighter on its own is not the most memorable film in the collection (head over to the Sex & Drugs volume for that).  It’s simply a mildly bizarre hygiene film about why and when kids should wash their hands.  I can’t remember exactly what made me think that this was something my future wife had to see.  Maybe it was living cake of soap that haunts a dirty child’s nightmares.  I’m not sure.  I know for a fact that it wasn’t the moment that I’m writing about today.  It never struck me until we watched it together.

Here’s how it went down.  The aforementioned bar of soap appears to young Billy in a dream.  Billy is surprisingly accepting of this and Soapy proceeds to lecture him on cleanliness.  The best moment comes when he runs down a list of scenarios after which it’s important to wash up.  One of them is “after playing with animals”.  Nothing wrong with that, but the visual that accompanies it looks like something out of a torture film for kiddies.  A little girl is holding a puppy that appears to be trying to rip the hair right out of her skull.  There’s no mistaking what’s going on here.  The child is clearly in pain and the puppy is gleefully chewing away at her head.

The child’s restraint should be acknowledged here.  She continues to support the puppy’s back end where most people would have punted that little monster like a football.  It’s also possible that she was afraid to drop the animal for fear that it would have taken her hair/face with it.  I know first hand that puppies have insanely sharp teeth.

After noticing what’s going on, it becomes all too obvious what is not happening here.  No adult on the set is coming over to help this child.  Not one person said, “Holy shit, the dog is eating that little girl!”  Or, if they did, no one did anything about it.  Granted, we only see a clip that is slightly over four seconds long, but four seconds can seem like a long time, especially when an animal is attempting to gnaw your face off.

I think more people would be alarmed if the puppy wasn’t so cute.  Imagine if it was some ugly hairless rat.  It would have looked like Cannibal Holocaust when people were through with it.  Cute things can get away with just about anything. 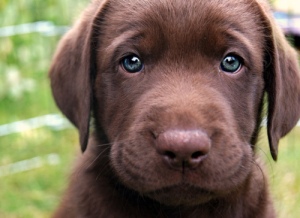 The face of a cold blooded killer.

I had watched all of these short films by myself but paid no mind to this girl’s plight.  Maybe it’s a gift to be able to walk through this world oblivious to the suffering of others.  Not my wife though, she immediately picked up on this child exploitation.  Like any other terrible people would have, we rewound the video a dozen or so times and laughed until we had tears in our eyes.

More than a decade later, I can still hear the way my wife was laughing that night.  It has a lot to do with where we are now.  Hard to believe that Soapy the Germ Fighter played such a significant part in my life.

Here’s the video in its entirety.  The gruesome attack takes place around the 5:20 mark.

This entry was posted in Educational, Nonhorror and tagged Educational. Bookmark the permalink.